Home
Warning: sizeof(): Parameter must be an array or an object that implements Countable in D:\home\factio-magazine.com\wwwroot\wp-content\themes\flyingnews\framework\lib\class_breadcrumbs.php on line 102
ProfilesJulia Chaplin of Gypset Style
Posted by: Melissa Maynard 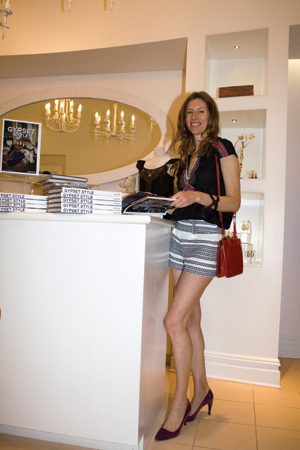 Fuse the jet set with the gypsy lifestyle and be part of the Gypset! This new way of living combines the sophistication of the jet setter with the free spirit of the gypsy and is collecting followers all around the world. A celebration took place for this new lifestyle at Nanette Lepore’s retail store on Damen Avenue in Chicago, a stylish backdrop to see what a Gypsetter is all about. According to the author of ‘Gypset Style’, Julia Chaplin, Gypsetters are artists, surfers, designers and bon vivants who live and work around the world. We caught up with her while in Chicago to learn how to take up life as a Gypsetter.

FACTIO MAGAZINE: Tell us about the history of Gypset.
JULIA CHAPLIN:  Gypset lifestyle references the 1960s but it is not a continuation. My book traces the wanderlust tendencies of the counterculture starting with the British romantic poets like Lord Byron and Percy Shelley who left England for more tolerant shores of Italy in the 1800s. The Victorian adventurers like Richard Burton and Jane Digby on up to the beatniks who lived in Tangier, and then on to the 1960s with hippies backpacking around India and Asia. All of these groups needed to go outside of society to find freedom and create. Gypsetters as a group really started to emerge in the 1990s when counterculture had become commodified. Places like Startsperre St. Tropez or downtown New York City, once alternative refuges, had been taken over by bankers and real estate tycoons. The Gypsetters came along cheap nba jerseys and said, that’s not luxury, that’s tacky. Real luxury isn’t for sale. It’s something that has soul and creativity.

FM: Would you call yourself a Gypsetter? And, what is your personal signature style?
JC: My parents were hippies so I guess I had negozio a predisposition to becoming a Gypsetter. Still, I’m only a part-time Gypsetter, because I’m in New York City half the year, although that seems to be changing by the minute. I just got back from Filicudi in the Aeolian islands off of Sicily, and Kenya. My favorite pieces right now are a Tracy Feith mini dress, it’s a Southwest/American Indian print that you’d find in a souvenir shop but it’s cut super mini and a bit 80s. I have a floor length Pucci beach caftan, but I’ve worn it a lot so it’s pretty beat up and I wear it really wrinkled during the summer in Montauk, Long Island. It’s Gypset to wear designer clothes as long as there are no visible logos and it’s sort of thrashed.

FM: What travel destinations fit the lifestyle?
JC: Gypset enclaves should be hard to get to so that those on a tight schedule won’t venture. It helps if there’s a good surf break. If possible no big resorts or chain businesses, some examples: Montauk, NY, the last town on Long Island. It takes three hours The to drive there from NYC and most people think it’s too far. The secret is once you get there, you don’t need to leave. I rent a little surf shack there and don’t need a car or shoes. Lamu, Kenya; Over-the-Top a little island off of Kenya… you have to fly on a little commuter plane that often breaks down for days at a time. Waiters go barefoot at all the restaurants, donkeys roam the streets. Ibiza, Spain; there’s an airport on the island, which is a drawback, but it takes awhile to drive to the north of the island where you can hide out in an
old farmhouse.

FM: How would a Gypset house be decorated?
JC: It depends on the house. I have several examples in my book which you can look at. I would say, generally, a mix of local ethnic wares with other pieces collected around the globe. No wall units, a projector but not a plasma tv.

FM: What inspired you to write the book?
JC: I was doing a lot of traveling, writing for various newspapers and mags (New York Times, Condé Nast Traveler, etc.)  and gravitated to bohemian enclaves that were hard to reach Hello and relatively undiscovered. But when I got to these towns and villages, there’d always be some groovy artist, surfer, or fashion person that had figured it out years earlier. They tended to have the coolest house on the best surf break. I began to see a pattern and realized a whole movement existed. These people were reacting against the jet set mode which had come to mean expensive, trendy hotels and tacky nightclubs in places like St. Tropez. In Sayulita, Mexico, I stayed with a French matrilineal clan, the Mignot sisters, and was very inspired by their carry-on lifestyle. They had a fleet of surfboards, a pack of cute kids, and a Soccer row of bedrooms and hammocks that were assigned on a first come, first served basis. It was alternative, but everyone seemed happy.

FM: Who’s the ultimate Gypsetter in your eyes?
JC: Carolyn Roumeguere, Mignot sisters, Ashley Bickerton, and the other people profiled in my book.

FM: So, in short, what should we do to live like a Gypsetter?
JC: Be spontaneous and wander.