Home
Warning: sizeof(): Parameter must be an array or an object that implements Countable in D:\home\factio-magazine.com\wwwroot\wp-content\themes\flyingnews\framework\lib\class_breadcrumbs.php on line 102
FetesRock/Style: Unveiling “American Icons” ...
Posted by: Melissa Maynard 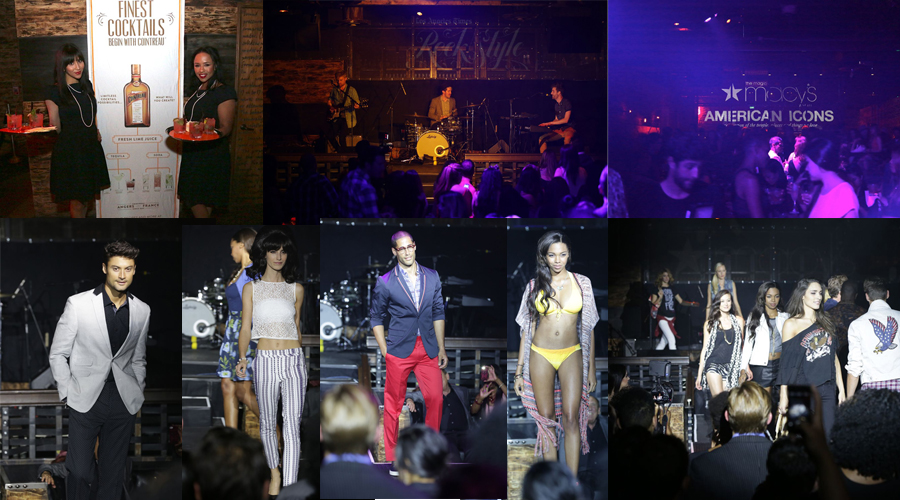 Macy’s continued its nationwide “American Icons” campaign in the heart of Hollywood Tuesday night at the Los Angeles Times Rock/Style, scorching the catwalk with a 30-minute show debuting summer ware for several powerhouses of fashion.

Fusing classic American nostalgia inspired by the likes of Marilyn Monroe and Estee Lauder with modern fashion icons such as Ralph Lauren and Tommy Hilfiger, Tinseltown sprinkled one more ingredient with the intent of arousing a favorite local flavor – Rock ‘N Roll.

This is the city where The Doors and Motley Crue amongst others made their bones; and on this same night just a few blocks east up Hollywood Blvd. and its ‘Walk of Fame,’ Tom Petty was concluding his multi-night concert stay at the historic Henry Fonda Theater.

This party took place at the trendy Hollywood hotspot Sound Nightclub with an estimated crowd of more than 600, and was DJ’ed by local celebrity disc jockey Stryker, who oversaw a playlist heavy on thick bass lines and catchy guitar riffs.

“I love the idea of fashion mixed with both a live band and a DJ,” said Stryker, who has been a featured DJ for nearly a decade and a half at Los Angeles’ ‘world famous’ KROQ.  “They go hand in hand.”

The fashion show wrapped up in just over a half hour, and within minutes the live act, Brooklyn’s Jukebox the Ghost, lassoed the drifting crowd’s attention and kept it, cresting the night’s experience before the tide naturally receded to the point where the three-piece band’s engagingly rhythmic and melodious rock sounds were ideal for this weeknight’s nightcap.

Though “not sure as to why” the band got the invite to this rather unusual music event, co-vocalist/pianist Ben Thornewill nonetheless endorsed the overarching theme of the evening, stating that fashion and rock music are “indispensable to a large degree.”

“Rock ‘N Roll 100% influences fashion,” noted Stryker, who referenced Nirvana’s early 90s impact on the flannel industry and Emo music’s inspiration to millions of boys’ shaggy, straight hair.  Adding that while he enjoys it when unique wardrobe shines brightly on stage, the “music better be good to match the style.”

One thing that is at least marginally influential on both fashion and rock music is drink, and throughout the night fine drink was provided by Cointreau (cocktails), Piper-Heidsieck (champagne) and Redd’s (Apple Ale).

Rock/Style came into existence four years ago by the L.A. Times.  It was started “to kick off summer and celebrate the intersection of music and fashion,” said L.A. Times Communications Director Hillary Manning, “two things that have special significance in the Southern California lifestyle and influence one another.”

Macy’s campaign officially launched May 15th in New York City, focusing on what would seemingly be the most obvious demographic during the Memorial Day to Independence Day season – Americans.

With attention to American style, famous American designers, and even the American Military with a fundraiser aimed at collecting $3 million dollars in hopes of supporting returning veterans and their families, ‘American Icons’ will culminate with Macy’s famous 4th of July Fireworks show in NYC.
-Kevin Cullwell